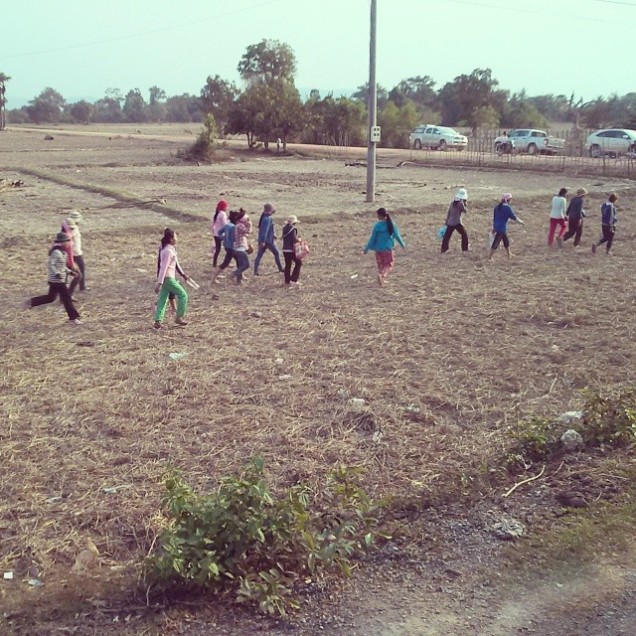 Stax and I are headed to Battambang to check out a traditional wedding exhibition involving dozens of couples that is supposed to take place at a temple outside of town as part of the Khmer New Year celebration.

It is supposed to take 5 hours from Phnom Penh to Battambang. It ends up taking 8. To clarify, this is an eight hour bus trip for a 291 km distance (for you ‘Mericans this amounts to a paltry 180 miles, or what some folks commute during one day.)

In a noble but misguided attempt to distract us from the discomfort, the driver and his obligatory sidekick play scratched-up DVDs on a small screen up front (all Cambodian bus drivers have a sort of buddy who rides up in front with them, yaks with them constantly, nudges them awake to take over driving duties when they eventually nod off during their epic hauls).

The first movie is an early John Woo crime melodrama – made in the early 1980s, evidently before Woo found his groove. It consists of:

1. An excruciating Olivia Newton John-inspired pop soundtrack pumped up to full volume and blasted out of fuzzy speakers just above our heads

2. Ultra-“serious” histrionics – meaning half of the running time is given over to tight shots of women’s faces crumpling slow-motion in anguish;

3. Incomprehensible shootouts in pitch blackness with fakey blood; and

4. Dubbing into Khmer that sounds as if a Cambodian man and woman yelled all the lines into a cheap mic placed at the bottom of a plastic bucket in a Phnom Penh warehouse.

Also I don’t think the voice actors actually saw any of the movie they were dubbing over, because all lines are delivered at the exact same volume and tone- the man a monotone clipped yammer, the woman a shrill wail just short of a scream. After the dubbing session the poor woman must have been coughing blood for a week.

With some earplugs though, this all becomes manageable after a while.

I’m drifting off to beddy-bye when the bus shudders to a sudden stop. Not so unusual given the driving patterns here, where people pull out in front of you quickly. Then 30 minutes elapses with no movement. I part my window curtain to see what could be happening out there.

My bleary eyes adjust to the blazing shadowless midday sun. We are mired in a massive traffic jam just outside of a small farming station. Dozens and dozens of Khmer agricultural workers, most of them women in groups, walk quickly across wide brown plowed fields toward the work station about a kilometer up the road.

So many workers hurry this way toward the station, faces tight, unspeaking, I deduce something unusual has happened. Their body language suggests people who are trying not to panic while evacuating a disaster zone. But this far back, and stuck in this jam, it’s impossible to discern any problem. My first thought is that the road has gone out – either that or a bad accident.

Then I see the bus. Or what used to be a bus. Now it’s a hulking 12-meter long shell, windowless and smoldering and hissing smack in the middle of the road. The billowing smoke stings the nostrils with the sweet, acrid chemical smell of shorted-out wire plastic coating.

The bus still stands upright on its wheels as we pass, so it must have caught on fire while driving. The workers probably heard the explosions from where they’ve been in the fields and feared the worst.

Workers rush toward an accident at a field station near Battambang. Image (c) Benjamin J Spencer

Luckily we see no blackened forms welded to the seats, no piles of cinders on the asphalt barely recognizable as people. The passengers escaped without harm.

I think briefly of the grinding gears, the probable sparking of the bottoming-out exhaust carriage, the oven-like heat of the day, and the persistent smell of oil and clutch fluid on, well, all buses. I think of how unknowingly fortunate the majority of passengers are to survive long hot journeys on these old Korean clunkers.

Not so fortunate are the two poor men laid out unconscious on the road as we pass the field station. Their motorbikes, from which they have recently been violently separated, lay dented and twisted out in the ditch, so much scrap metal. Their flip flops are scattered on different parts of the road several meters back. The men appear to be on death’s door.

One man’s face resembles a giant purple-black bruise. His eyes are close. The flesh of his elbows and knees look like chewed up Fancy Feast cat food and a raw, serrated gash runs from his hip  down to his calves. The other man is in even worse shape – totally motionless, features completely obscured by blood and dust, arm bent behind his head, one spindly-fingered hand flopped out almost like he’s waving at us awkwardly, but backwards.

A crowd stands silently surrounding the men, bending over them curiously, faces blank, while a thin figure crouches down apparently trying to wake them up with sharp claps. It doesn’t seem to be working.

A huge irrigation truck plows toward us from a dirt outlet road and parks himself directly in front of the line of traffic that has been slowing down on the opposite lane, swinging around the melee widely to look at the accident. These rubberneckers have been the ones obstructing the Battambang-bound traffic.

And just like that, we are roaring past the men, the smoking bus, the crowds and the workers, the blazing fields. The sudden momentum splashes me out of my waking dream. The clipped yammer of the man on the silly dubbed John Woo movie assaults my ears. The movie has been rattling on this entire time and is now just at it’s end point. I look up dumbly at the screen.

From a lens that appears to have been smeared with petroleum jelly, the legendary director has captured a funeral party gathered around an open grave in a green cemetery.

The huge gleaming 1980s perms and scarecrow-like shoulder pads of the silently weeping Chinese women on the screen fill me with distaste. Just underneath the distaste lies a weird emotion I can only describe as dread.

I quickly yank back the sliding window to let the hot wind flow past my sweating face. This doesn’t help matters. I’m ready for this ride to be over.